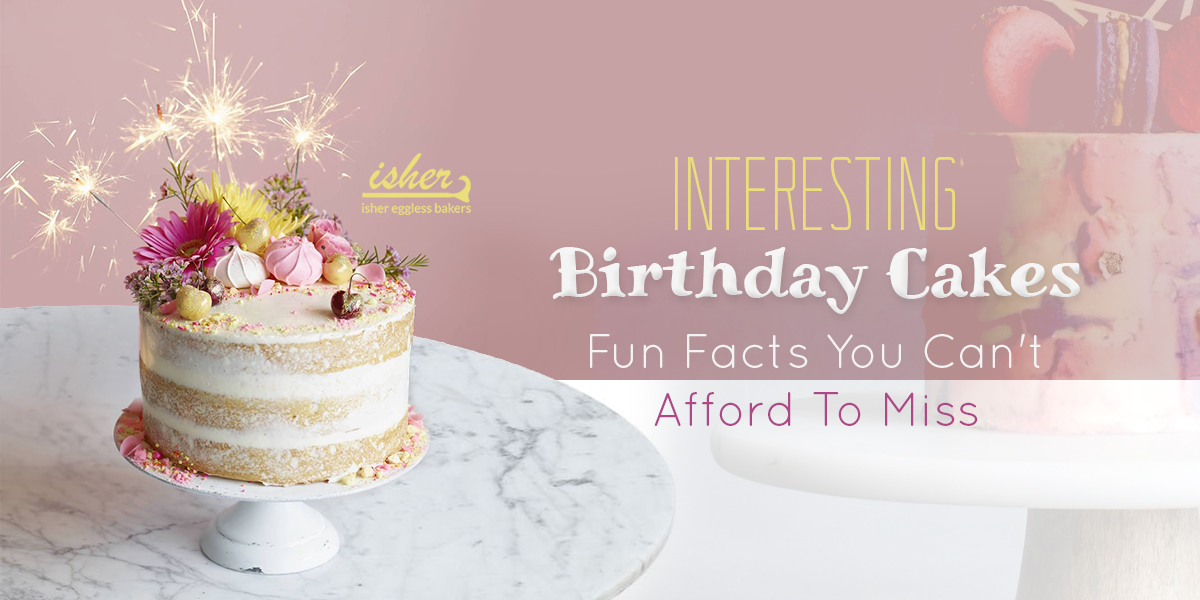 “ Can’t Keep Calm, It’s My Birthday Month “ is one of the most popular phrases, almost every one of us said at some point in life. Cake day is the most awaited day of the year. As we all know deep inside that our loved ones will plan a superb party with a gorgeous cake from the search query best cake shop near me.

Birthday Cakes are sugary delight rich in cream representing love, emotion, and friendship. More than a hundred types of birthday cakes are out in the world - so you have plenty of options to try each of them.

Traditionally, cakes were just modification of bread, but the everyday new recipe comes up, including a variety of delicious ingredients like meringues, pastries, custards, and pies. We at the Isher Bakers, know that birthday cake has become a staple of birthday celebrations across the globe. Thus, we make sure to deliver the best birthday cakes in Melbourne.

Birthday and fun go hand in hand. And, behind the scrumptious birthday cakes lies a lot of fascinating facts. Let’s explore some of the unknown fun facts :

Do you know about the Beltane festival or the Celtic people? Cakes were part of strange rituals many years ago.

Celtic festival of Beltane is a festival to celebrate fertility and renewal. During the festival, huge bonfires were lit, and people danced and feasted around it. Celtic Festival is marked with Beltane cake which was divided into a number of pieces and then distributed.

The cake had one particular piece called cailleach beal-tine—i.e., the Beltane carline. The person receiving the darkened slice of cake would pretend to sacrifice himself into a fire. While the rest of the evening spent speaking in hushed tones around that individual as if they were indeed dead.

According to facts, the first actual birthday cake was made in Germany in the Middle Ages. Celebrating kid’s birthday with a cake called to be as Kinderfest Celebrations by the Germans. Traditionally, cakes were coarse and bread-like. But., later became a much sweeter version, called Geburtstagstorten.

Soft, moist and rich in a cream such as a single bite of a cake slice meltdown in your mouth is what we aim at; being the best bakery Melbourne.


3. Candles on the Cake Mystery

Artemis is considered to be the goddess of the moon by the Greeks. Thus, they used to bake round cakes to honor Artemis and lit a candle on the cake to represent the glow of the moon. It was also believed that smoke carried thoughts and prayers to the heavens.

These days it is believed that if a birthday boy/girl blows out all of the candles on the cake in one breath, their wish will come true. Well, it’s worth a try!

Birthdays are considered to be fortune with a birthday cake, lit candle, and happy birthday song. Initially, the “Good Morning to All” song was written by two sisters Mildred and Patty Hill from Kentucky, U.S.A., in 1893. The song was first sung in Patty’s kindergarten class. Later, around 1910, the words of the song were changed to focus on birthdays. And, today, “Happy Birthday to You” is the most frequently sung song in the English language.

Get the best cakes in Melbourne from your favorite bakery and sing the songs of delight for your dear one’s birthday.

At the time of the 17th century, people in England believed the myth that keeping fruitcakes under the pillow of unmarried will give them sweet dreams about their fiancee or your future spouse.

There are three aspects to the flavor of a birthday cake. This includes the :

i) The flavor of the cake sponge - Chocolate is the most popular flavor in cake sponges.

ii) The flavor of the cream filling in the cake - popular cream fillings include various types of butter-cream, chocolate ganache, creme patisserie

If you are in Melbourne and looking for some serious chocolate cake experience, then you must try Chocolate Strawberry Delight Cake !!


7. List of Record-Breaking Birthday Cakes that left everyone W.O.W.!!

A). The Most Expensive Cake in World

The cake flavors for the front-row seating was done in “Madagascan vanilla bean with mascarpone cream, and strawberry conserves.” While the runway was done in Belgium chocolate.

Make your celebrations memorable for the gathering. Plan a themed birthday party and get the best designer eggless and vegan cakes in Melbourne.

Pirate Fantasy cake is a mixture of ingredients, luxury and culinary. One of the most expensive cakes of the world cost $35 million! The cake was crafted and designed by Chef .D.K. (Dimuthu Kumarasinghe), Group Skills Development Chef, Aitken Spence Hotels and Heritance Hotels & Resorts.

You can’t miss the ingredients and fondants used to bake the cake :

The cake was adorned with ten different stones from the sapphire family. The most expensive and the rarest stone being a “Padmaraja” or the ‘King Sapphire.” Moreover, the cake also included ten pieces of jewelry from necklaces, bracelets, rings, brooches pendants, tie pins, cuff links to nose rings, and toe rings.

The cake truly amazed everyone with its look and definitely flavor. As each layer boasts different flavors, each of which is made using exotic ingredients such as cinnamon, zucchini, purple yam, coconut chips as well as pistachio, rosemary, almond cookies, white chocolate, coconut meringue, baked cheese, sweet wineberry, pineapple, walnut, pumpkin, and lemon.

The Sri Chinmoy Centre in New York holds the Guinness World Record for the most lit birthday candles on a cake that was over 70,000 candles. Sadly, due to the large amount, fire extinguishers were used as Sri Chinmoy wasn’t able to blow them out.

Birthday Cake is the soul of birthday parties. And, the centerpiece of the party should be the cake that can leave a remarkable impression. We at Isher’s, the best cake shop Melbourne, wish to add more fun, love, and taste to your celebrations.

Visit us and choose your favorite cake and Have Happy Celebrations!!