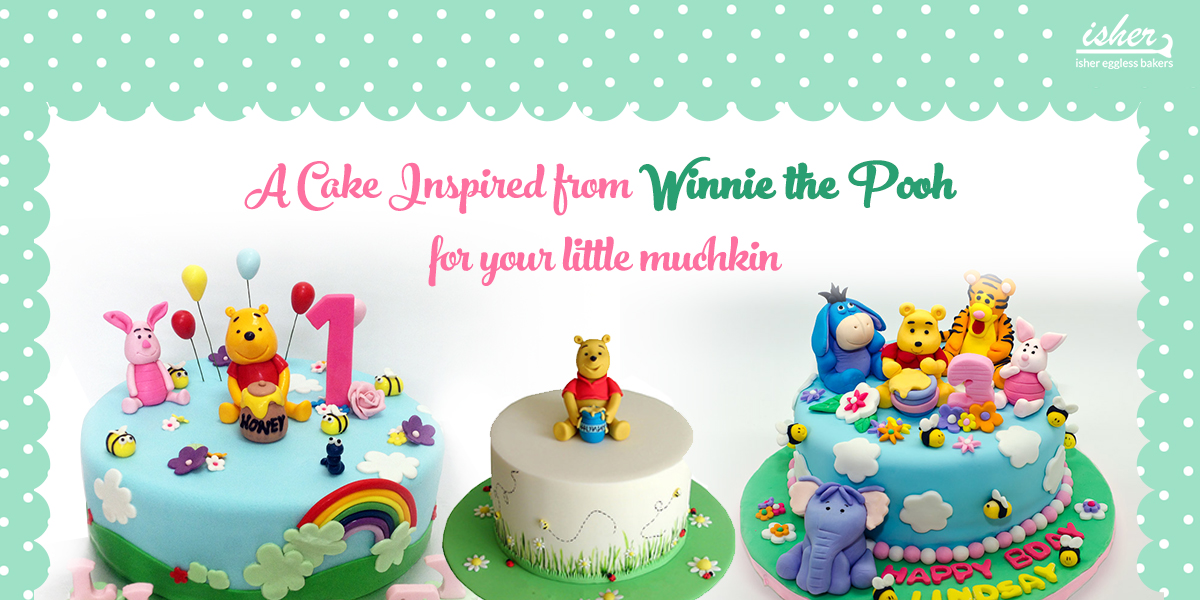 Winnie the Pooh is one of the most popular animated characters loved most by the toddlers. It was created back in 1926 by Alan Alexander Milne. It reflects the story of a carefree bear living in a jungle with a bunch of animals. The character gradually became so popular that we recently encountered a full animated movie of Winnie the Pooh. However, Milne named him after a female black bear named Winnie who accompanied Canadian soldiers to England during World War I as a morale-booster. Winnie the Pooh is loved by kids in Australia as well, and as the best cake shop in Melbourne, we have a range of pooh bear cakes for you.

Pooh is very fond of food, especially Honey. You would find a bunch of his stories running around just honey. He has got a couple of friends like Piglet, Eeyore, Rabbit, Tigger and of course Christopher Robin and a few more. The fictional bear has its various adventures throughout the collection of the short stories. The character has eventually become so popular that it has been adapted by Disney for a number of feature series and movies. Young kids enjoy having him around in the form of various collectibles. Even, Winnie the Pooh is one of the most adored birthday cakes in Melbourne. It is through the latest update that Disney has created another marvel, with a movie by the name of Christopher Robin. The live action movie has almost achieved 2 Billion Dollar sale so far.

So you may not wonder why kids love him so much. Thus to make an ideal cake for your young one, choose this Disney Character. It will surely bring a bright smile on his or her face. We have handcrafted a range of eggless and vegan birthday cakes for your celebrations. The Winnie the Pooh cakes are available in many designs. We will share some of the designs you might love for making your little one's birthday special:

Pooh, as he admits, is not very intelligent, but is full of ideas that can save the day. There are many moments that bring the memory of the cuddled bear alive. Like the one when pooh disguises as a rain cloud and floats by way of a balloon or the one when he overstays Rabbits lunch due to eating excessive honey and many more like these. Edible image cakes give you a chance to bring these moments alive by imprinting the images on your edible image cakes. Our Edible Image eggless birthday cakes can bring together the complete host of the series in front of you and make your Kids birthday a special one. You can select from our range of Edible Image cake designs and select the image and flavor you want on your cake.

Our Winnie the Pooh cake is ideal for every occasion. This eggless birthday cake can have 2 or 3 layers. The bottom layer can have the 100 Acre Wood`s charm. From Tree figures to rivers all can be set on bottom. The Upper layer can have friends of Pooh from the series. The top of the cake can have the Pooh bear or the Honey Pot, which is, in reality, most of what Pooh`s life is about. This multi-tier gluten-free birthday cake can serve large gatherings. The eggless buttercream icing cake can even have a handcrafted honey pot crafted or another feature you would wish. The cake can be baked in any of your signature flavors from Base to the top icing, making the cake delectable.

The number birthday cake is the best way to celebrate an anniversary. The cake base has multiple layers of sponge layered with our signature ganache. The cake top has buttercream icing with various creams piped flowers featured on top. The cake top has a decoration of numerous small images. The cake top can have Images of all the friends of Pooh. This cake is an example of one of the best cakes in Melbourne. This cake is perfect for a large gathering and a Winnie the Pooh theme birthday party.

The multilayer eggless birthday cakes are crafted by setting multiple layers of cake one atop the other. Each layer is loaded with chocolate ganache before mounting the additional layer atop it. The cake base is then sliced to give the shape of a bear. The bottom is then slowly covered with fondant to provide the final form. The top is then doctored with bright yellow color for the bear and not to forget the signature red shirt of Winnie the Pooh. This cake is the perfect replica of the Winnie the Pooh and is a real show stopper for your kids birthday.

Isher Eggless bakers, we ensure that your celebrations are loaded with the freshness and delicate flavor of our cake. As the best bakery in Melbourne, we delivered best in class eggless and vegan cakes. Our staff of bakers and cake decorators is always ready to make custom cake experience memorable for your loved ones. Once you have gives Isher Eggless bakers a chance to serve, be assured that your party and your cake are in the best hands.